What is a Unichip?

The UNICHIP gives the properly trained Unichip Authorized Agent full control over the timing and mixture functions of most electronically controlled vehicles (Petrol or Diesel). Not only can mixtures and timing be set, but it can also be set under various load and RPM conditions. This gives one the ability to optimise the vehicle for economy under light load conditions and set it up for optimum performance under full-throttle conditions.

The UNICHIP is much more than just a “chip”. In actual fact it is a fully functioning computer which is added to the vehicle’s existing engine control unit (ECU). Apart from controlling general Timing and Fuel Mixtures it can also do Boost Control, EGT protection, drive existing injectors (Petrol or Diesel ) or additional Injectors, eliminate road speed governors and much, much more. It can be accurately described as a “Piggyback” computer. With 5 Map capabilities you can have a custom tune to suit your specific needs, eg High Octane map, Low Octane map, High Boost map, Low Boost Map, Towing Map, Economy map,Immobiliser map. The possibilities are endless.

Why should I install a Unichip to my car?

The most obvious reason is to increase engine performance. Significant gains in torque and power across the entire RPM range are possible. In addition, the engine will be smoother, deliver greater response and maximise fuel efficiency at all RPM and throttle positions. A second reason is to harness the performance value of engine and exhaust modifications. Standard engine management systems are not programmed to cater for exhaust headers, cat back exhaust systems, hi flow air filters, performance cam shafts or larger turbo chargers and intercoolers.

How does the Unichip increase engine power?

Every engine requires optimum timing and air fuel ratio at all RPM and load conditions. Unichip gives the experienced Unichip authorized agent the access and ability to adjust and optimise timing, fuel system and boost if required in real time on a chassis dynamometer to suit YOUR vehicle.

Unichip Real Time Tuning – what does this mean?

Real Time Tuning describes the process whereby adjustments are made to Timing and Air Fuel Ratio whilst running the vehicle on a chassis dynamometer. In doing so the Unichip authorized agent can see the power output from the dynamometer live whilst making changes to Timing and Air Fuel Ratio’s with the Unichip in Real Time. This greatly reduces the time spent on the Dynamometer to achieve a perfect tune.

How much power can I expect?

Power gains of 10kw-30kw are common place, as measured by a Unichip authorized dealer on an accurate chassis dynamometer. Whilst less common power gains of 50kw have been verified. The exact power gain however depends on the design and condition of the engine and the factory calibration on the engine control unit. No two engines are identical. Unichip results represents the optimisation of each individual engine. Unichip results are verified by before and after dynamometer tests measured at 100% throttle opening across the entire RPM range.

Will Unichip improve my fuel economy?

Yes. In most driving conditions Unichip will improve fuel economy. Many modern fuel injected engines waste fuel by running very rich air fuel ratios at part throttle and full throttle openings. With Unichip, it is a simple procedure to correctly adjust the air fuel ratio and timing over the entire engine operation for maximum economy at light throttle and maximum power at full throttle.

Will Unichip improve my fuel economy?

Unichip is a supplementary engine management system, As such; it is far more advanced than “generic plug-in performance chip” products. It is individually programmable to meet the requirements of engine and driver. Being fully adjustable Unichip can cater for non-standard, current and future engine modifications. Best of all, Unichip can deliver the most personalised power result every time – uniquely tuned for fuel type and rating and even particular ambient conditions of operation. With optional 5 map capability, your Unichip authorized agent can tailor a tune to suit your requirements.

Best of all there is a 99% chance that you can install your Unichip to your new car when the time comes. Meaning you only have to buy a Unichip once, simply swap it from vehicle to vehicle with tuning only required.

No. Unichip is a supplementary computer which is programmed to contain the optimum fuel and ignition adjustments for each individual engine.

The factory engine management control unit is not altered in any way, The Unichip ECU is simply installed by connecting to the wires of the original factory E.C.U.

Plug and Play options are available for most vehicles.

Once removed there is no electronic footprint left behind for dealers to find.

A 2 year unlimited kilometer warranty applies for all Unichip products.

This is because it is the ONLY LIVE tuning software on the market for late model diesel and petrol engines; The Unichip is more than a traditional Chip, its closer to a standalone E.C.U. We calibrate the Unichip Unit LIVE on the dyno (this is very important) to give you the best and SAFEST power torque and fuel economy!

So for a product that won’t void your factory warranty, (The Unichip is fitted via a harness directly to your vehicle E.C.U), we do not remove,open or “flash”/write” over your factory E.C.U. This is hands down the safest, most precise, most diverse (Up to 5 different maps) and flexible (Can be moved from vehicle to vehicle) tuning solution on the market. Go no further than a Unichip! 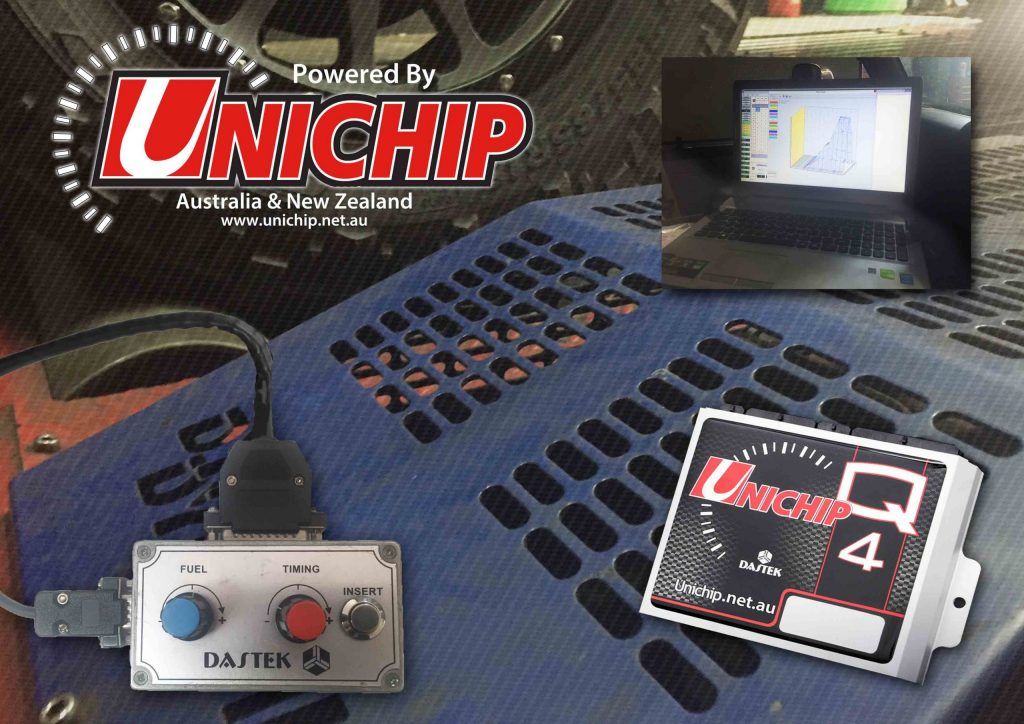 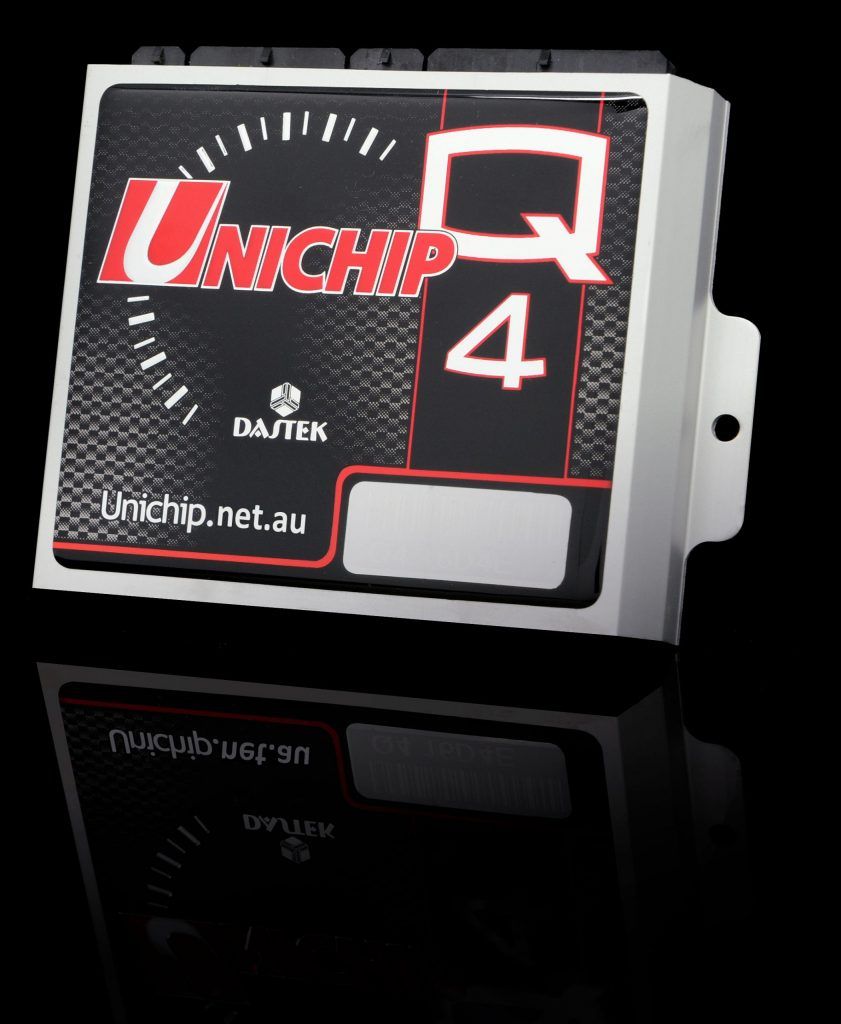 Customers please be aware of unauthorized Unichip Installers that are NOT on our Dealer List on this website. These unauthorized installers have NO SUPPORT, NO TRAINING and NO WARRANTY.

We here at Unichip Australia and New Zealand take pride in choosing only the best dyno tuners from around the country to fit, tune and warranty our product. There is very stringent training involved in becoming an Authorized Unichip Agent. This ensures the Unichip product is fitted and tuned correctly for best results to the customer.

We have spent countless hours developing the New Unichip Uni-x ECU, the injector drivers for Toyota D4D, and soon to be released Injector driver for Ford Ranger/ Mazda BT50. Our Australian R&D doesn’t finish there, we have spent well over 18 months developing the brand new Plug and Play harness for the 200/70 V8 Toyota Land cruiser. These can only be purchased through Authorized Unichip Agents found on this list below. So please give your local Unichip agent a call before you compromise your vehicle with an Unauthorized Illegal product, after all your vehicle is your pride and joy and doesn’t deserve to be compromised.