Go Back To Shop All

The Kia stinger is an amazing platform to begin with, however we can unlock the full power of your 3.3lt twin turbo and unleash its true potential, more power more torque and above all we can do this safely!

The Unichip is no ordinary “chip” think of it more like a standalone ecu we are not like so many that just increase boost pressure only relying on the factory fuel curve (11.1:1 afr) to compensate for the increase in boost volume. (Most of the tuning devices on the market only offer this). We hear of stories about needing to have the spark plugs “regapped” or replaced, this can be the case if the tune parameters are not set up correctly!

Been that the Unichip is more like a complete aftermarket ECU, we have full 3D control over Air (Boost), Fuel, (We can manipulate injector scaling) and ignition timing. We also modify the throttle, to sharpen the feel. The Unichip ECU can be “retuned” at any stage or as any more performance parts are added to your vehicle. The Unichip can also have up to 5 separate tunes located in the “MAP Select Switch” the most popular been a different setting for different octane fuels.

Because the Unichip ecu “runs the engine” it does not communicate with the Factory ecu, no electronic footprint is left on the factory ecu. The Unichip can be removed at anytime in a couple of minutes and no trace is ever left. Once the Unichip is refitted none of the settings are “lost” and you go back to enjoying the power and fuel savings!

We recommend you have the Unichip ECU fitted and tuned from your local Unichip agent. This kit is not intended for a DIY use.

With Impressive torque improvements as well,

HOW DOES A UNICHIP WORK ON YOUR 2018 KIA STINGER?

What sensor’s do we have full control over?
– Both MAP sensors
-Both Lambda Sensors
– The TPS
– The Crank signal
AFR’s what do we modifiy?
Air fuel ratio is modified by direct control of the Lambda sensors.
Ignition timing what do we adjust?
Ignition timing changes are made through the crank signal.
Boost control how is this achieved?
The boost curve is adjusted via RPM, boost curve and adjustments are made through direct control of the MAP sensors only, we do not touch the electronic wastegates.
What will the standard ECU see?
The standard ECU only ever sees standard boost levels due to the voltage clamp in the Unichip.
Where does the Unichip ECU plug in? – See video Below:
Install Video for Kia stinger Plug and Play E.C.U.

How Does The Additional Map Select Switch work? (BUY NOW)

This option enables the 5 map capability of the Unichip Uni-x ECU. This means you can access the 5 maps which can be tailored to your requirements. For example, High octane Map, low octane map, Standard Map, Immobiliser Map or even a race fuel map. Speak to your Authorised Unichip agent to tailor 5 tunes to suit your application.

For your convenience, we have set up 5 maps that can be activated via the Unichip App on your smartphone.

These maps have been set up to suit different fuel and conditions. 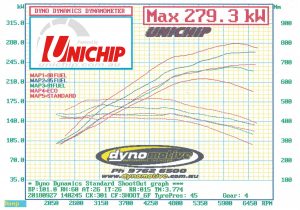 Please be aware if you run 91 octane fuel on the 98 Map you can cause catastrophic damage to your vehicle from engine detonation.

Do you need a new fuse box lid? This option is available at checkout.

There are no reviews yet.

Only logged in customers who have purchased this product may leave a review.